On Friday 18th November, Waltham-on-the-Wolds CE Primary School was covered in spots! For Children in Need, all the children and staff dressed up in colourful spots to show their support for children across the country who are in difficult circumstances.

Not only was the school exploding with polka dots, but all the children brought in their special teddies so that they could look after them for the day.

When it came to our Special Assembly to celebrate the children’s achievements in the week, the school hall was bursting with parents, children, teddies and multicolours. We held a whole school parade so that each class could dance and show off their outfits and teddies.

Throughout the week, children and parents had been voting for the member of staff they’d like to see get dunked at the end of the week - £1 a go! It was a close run thing between Mrs Hopkins, Mrs Saunders, Mr Wills and Mrs Morris. Check out the picture to see school governor, Mr Quine and a parent dunking Mrs Morris and Mr Wills; they had both made an extra donation for the privilege! What great sports they all were.

We raised nearly £300 for Children in Need! We had such a fantastic day and cannot thank everyone enough for all the money donated for this great cause.

Sycamore dancing with their friends. 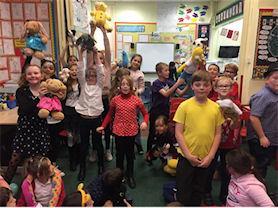 Oak Class dancing with their friends. 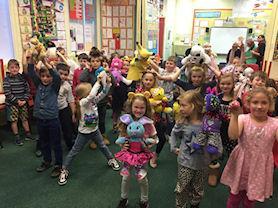 The whole school raising money for Children in Need. 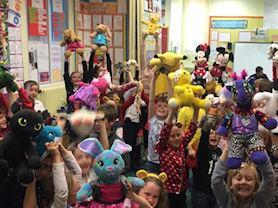 Sian and David getting covered in left-overs from lunchtime! 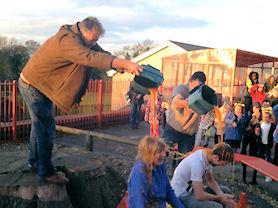